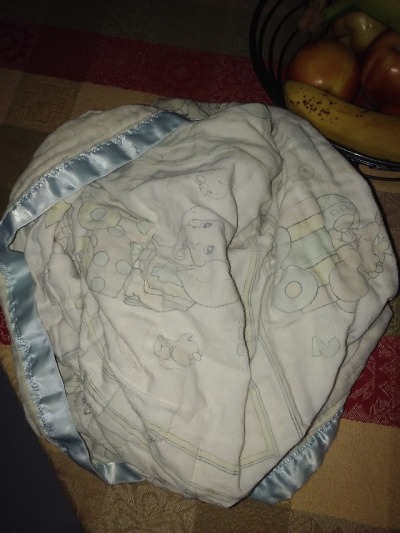 Blanky is a Precious Moments counting quilt. Blanky is my eldest child! He was born in 1995 which means that he is older than me by five years. The picture above was taken on his birthday in 2018! Blanky has many animals on him and they each have a number associated with them from 1 to 10. There are 12 panels on him, one for each number, one to display the type of blanket he is, and one to write your name on so you know who the blanket belongs to. He has a strip of baby blue fabric around the edges of him. It feels a bit like satin to me. He has a lot of strings coming undone, but that is alright. He is just a very old baby blanket.

Blanky is not a boy!!! I know he uses he/him pronouns, but he has no gender. Sometimes his siblings call him their sister, sometimes they call him their brother, sometimes I call him my daughter, sometimes I call him my child, he does not really care which term is used for him. Blanky is also a lesbian. Blanky has a girlfriend and her name is Petra. She's very cute. Blanky is ambidextrous, but mostly uses his right hand.
Here are some little facts about Blanky. He can play many instruments like the viola, accordion, saxophone, and piano. He is the most musically inclined child out of the three. Blanky is also very goth. He is very interested in gothic things (which includes gothic art and the subculture). Blanky does not dress in a gothic way that much, but you can tell from his one inverted cross earring that he is very serious about it. Blanky is somewhat of a quiet person. He likes to keep to himself, but he is very extroverted around his siblings. He loves to play with them and he loves to make music with them. Blanky also loves to write poetry which sometimes ends up being another wonderful song of his or he might record himself reciting the poem. I have heard his poems before and I think he is a very excellent writer. He must be very good at writing letters to others. Here is a link to the tumblr blog that I made for Blanky.

Here is a list of some bands that Blanky really likes:

Here is a list of some movies that Blanky really likes:

Here is a list of some tv shows that Blanky really likes:

No one has ever asked me why I draw Blanky the way that I do and I really want to talk about that! Obviously he looks a lot different than he actually does since he is a blanket and I draw him as a human being. One thing that I think would be the obvious choice is his hair color. It is blue because of the strip of baby blue that is along his edges. I feel like the blue chosen for his hair is slightly darker than that blue that is actually on him, but that is alright. I chose to give Blanky vitiligo because of the pictures that are on him. I thought that would be an interesting way to somehow represent that part of him in a human version of him. Blanky also has brown eyes because my eyes are brown and he is my child so he has to look like me a little bit. I also like brown eyes a lot and blue eyes creep me out. Below are going to be a few drawings I have done of him. They will mostly cover any major changes in his design.

This isn't really the first drawing I've done of him, but it is the first drawing I did of him after I changed how he looked. How he looked before was not good at all, I hated it! In this drawing he is dressed as a clown! His siblings are in this drawing with him, but right now we are looking at Blanky in particular. At first I made his hair long and I continued drawing his hair long and in a loose ponytail since his hair is really curly. I really like his hat in this drawing. Maybe one day I'll make a hat that looks like it. Googly eyes on a hat is always a good idea!

Nothing drastic has been done to his design. This is just Blanky in that one cute style that I do. Usually my kids are drawn in this style since it fits them very well. That is all I really have to say about this drawing. This may have been the last time I drew him with his long hair. I thought his long hair looked stupid and he looked like a founding father with that ponytail. He can have his long hair back, but he has to style it in a cool way. 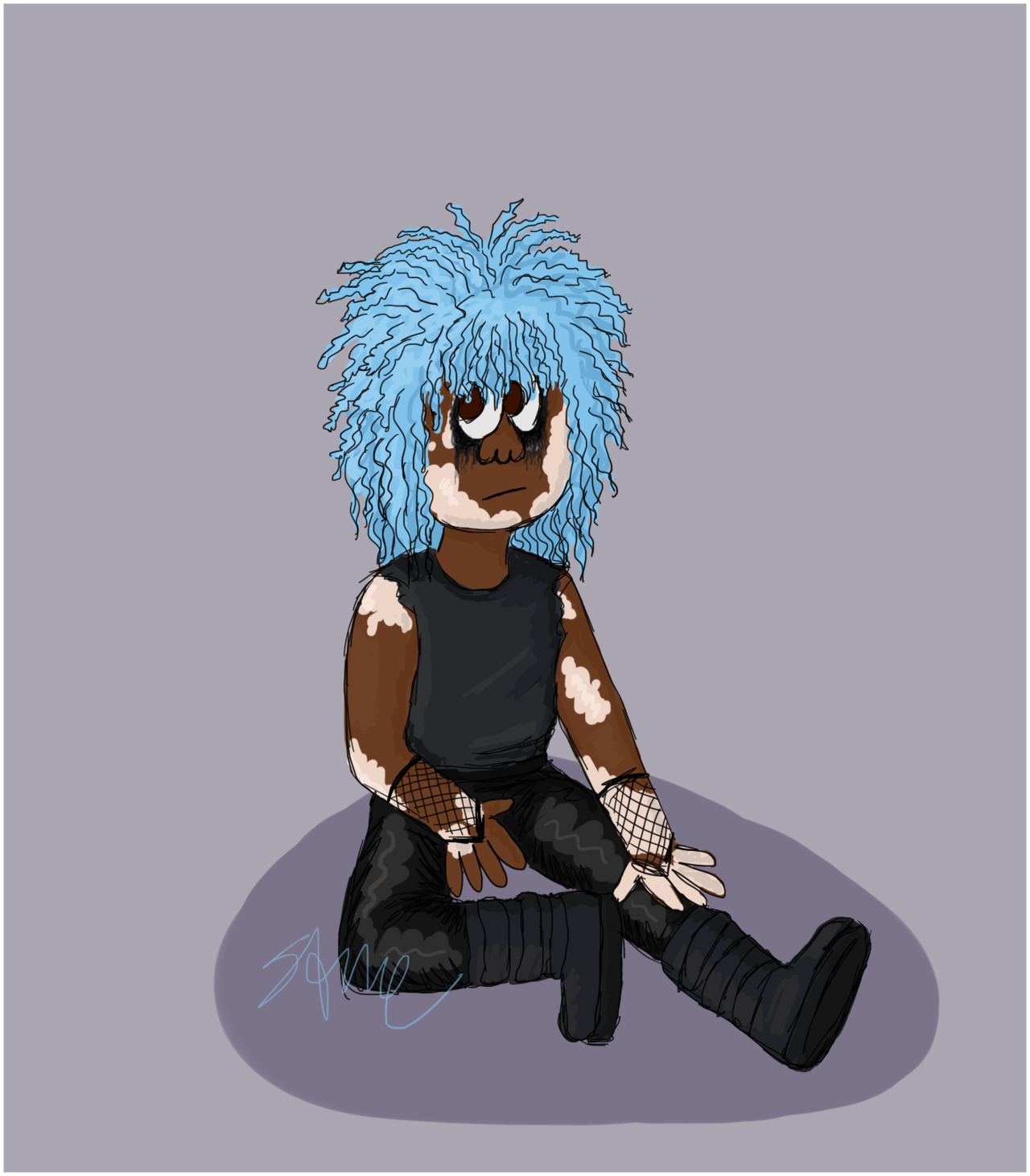 There were some drawings in between this one and the one before, but this one has the better drawn accordion in it. Linnell's influence on Blanky continues here! Also his inverted cross earring is back! I have missed it so much. I designed Blanky his own accordion. It's black (actually grey, but we'll ignore that), white, and red since he's goth. Maybe that isn't a goth combination, more of an emo one. Or could be both! I think this outfit is also very Blanky, but his boots could have been more goth instead of being plain black combat boots. That's all I have to say for now! That accordion looks really poorly drawn. I should draw him with his accordion again.