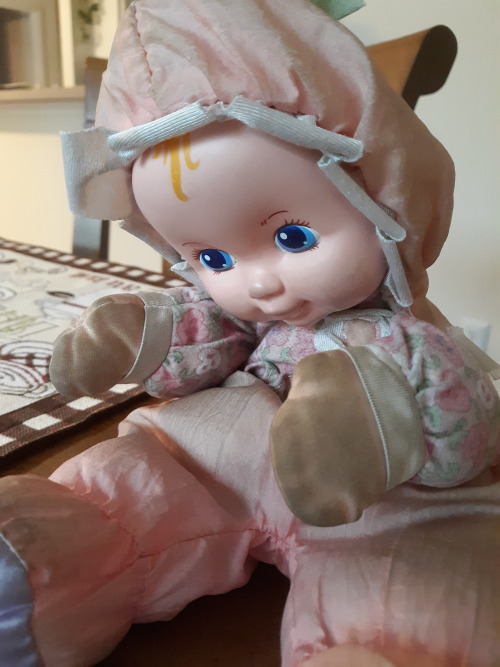 Babysister is a Playskool My Very Soft Baby Doll. She is from 1999. I got her as a Christmas present in 2004. She is my youngest child. Babysister is a baby and a sister. Please, do not forget that. It is very important that you remember that. It is all you ever need to know. Nothing else is important except for that. Babysister hasn't changed drastically ever since I got her. The only changes are that she's really dirty now, the Playskool logo on her hip is completely gone, and she obtained a hole on the seam on her butt which has been sewn shut. She also has a few scratches on her face. Her squeaker still works! She likes to squeak a lot.

Babysister is a trans lesbian! She is very butch. She has a beautiful girlfriend named Libra whom she loves very much. Babysister uses she/her pronouns.
Here are some facts about Babysister. She is very punk! She dresses in a lot of punk clothing and likes the subculture a lot except for the plethora of Nazis, those guys are evil. Babysister really likes collecting knives and she uses them to impress her girlfriend by throwing them at objects and sometimes to whittle a small object out of wood. Babysister was the first child to learn how to drive because she wanted to be able to drive Libra to places. Babysister loves to play with her siblings! Baby and Babysister sometimes wrestle and Blanky will act as the referee and also the announcer. She also loves to explore places with her siblings. Babysister loves opossums. Babysister can play the guitar! She is the only one who can play the guitar out of the three of them (Blanky is terrified of that instrument). Her guitar is pink and has LIBRA written on the body in white. Here is a link to her tumblr blog.

Here is a list of some bands that Babysister really likes:

Here is a list of some movies that Babysister really likes:

Here is a list of some tv shows that Babysister really likes:

Now here is the part where I explain why I draw Babysister a certain way. Like with Baby, she's already a human so it's easy to draw an older human version of her. Babysister has the same hair color and type being blonde and curly. She also has the same eye color, but not really. I used the dark blue of her pupil as her eye color rather than the faded blue of her iris. I did not notice that I did that until many months later after I started using that color. Her skin color is the same or at least close to it. I always thought that Babysister's skin was very pink, but I guess there are some white people out there who are really pink. I try to draw Babysister slightly taller than Baby when they're kids, but sometimes I forget about that or it doesn't end up looking that way. She is also taller than Libra. When they're adults, I try to draw Babysister around six feet and Libra around five feet six inches. Babysister is left handed because of the one drawing I did of her based off of a picture of John Flansburgh.

I don't think there's anything new about Babysister here compared to the drawings that were done before this one. Her design is pretty straight forward. I just make her look like how she actually looks, but she's just not a baby anymore and is instead a kid. She's supposed to be 10 or something in this drawing. I don't really know what 10 year olds look like. Maybe in the future if I ever plan on drawing any of them at a certain age I should find a picture of myself at that age and base their features off of that as long as they're being drawn younger than I am. I like clown Babysister a lot. I have those same shoes!

Babysister in that cute cartoony style that I do! She's holding a knife and is showing it to Baby. I should draw more pictures of her with knives. I don't have much to say about this. Nothing really changes here. 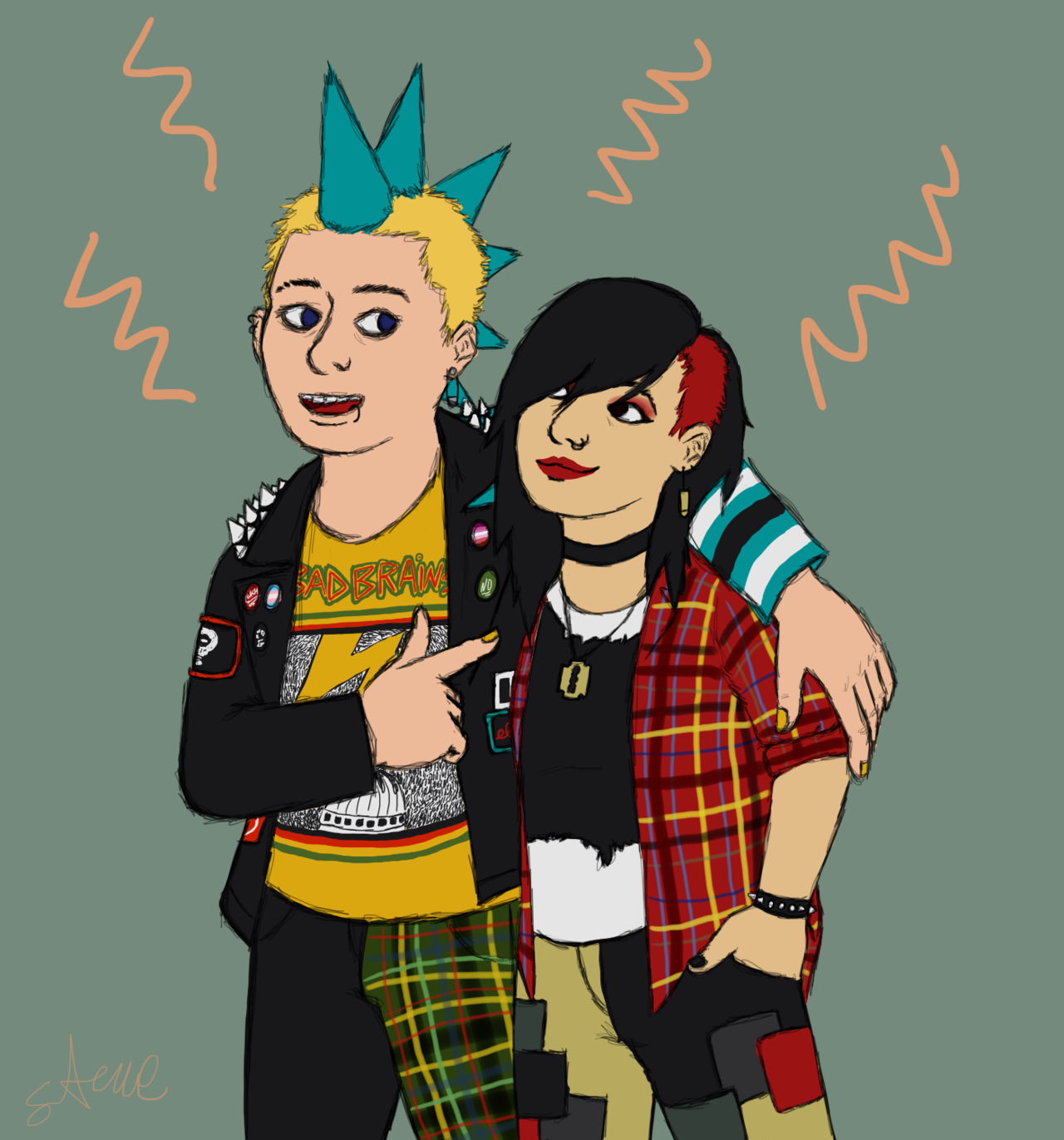 Not my first drawing of Babysister and Libra together, but it's the first one of them at an older age. They're in their 20's here ... I think. I really wanted to draw them punk since I've established before that Babysister is really punk, but never actually put her in punk clothes yet. I really like her outfit. Whenever I draw a punk I always give them a jacket that has one striped sleeve because I really wanted a jacket with one striped sleeve (I have one now! I made my own punk jacket with lots of spikes and patches). Libra's shirt is kinda based off of Gerard Way's shirt from the music video for "Desolation Row," but the shirt underneath for him was red instead of white. I don't like this drawing that much because I can draw people better now, but it's still nice. I should draw Babysister with her mohawk spiked up again. 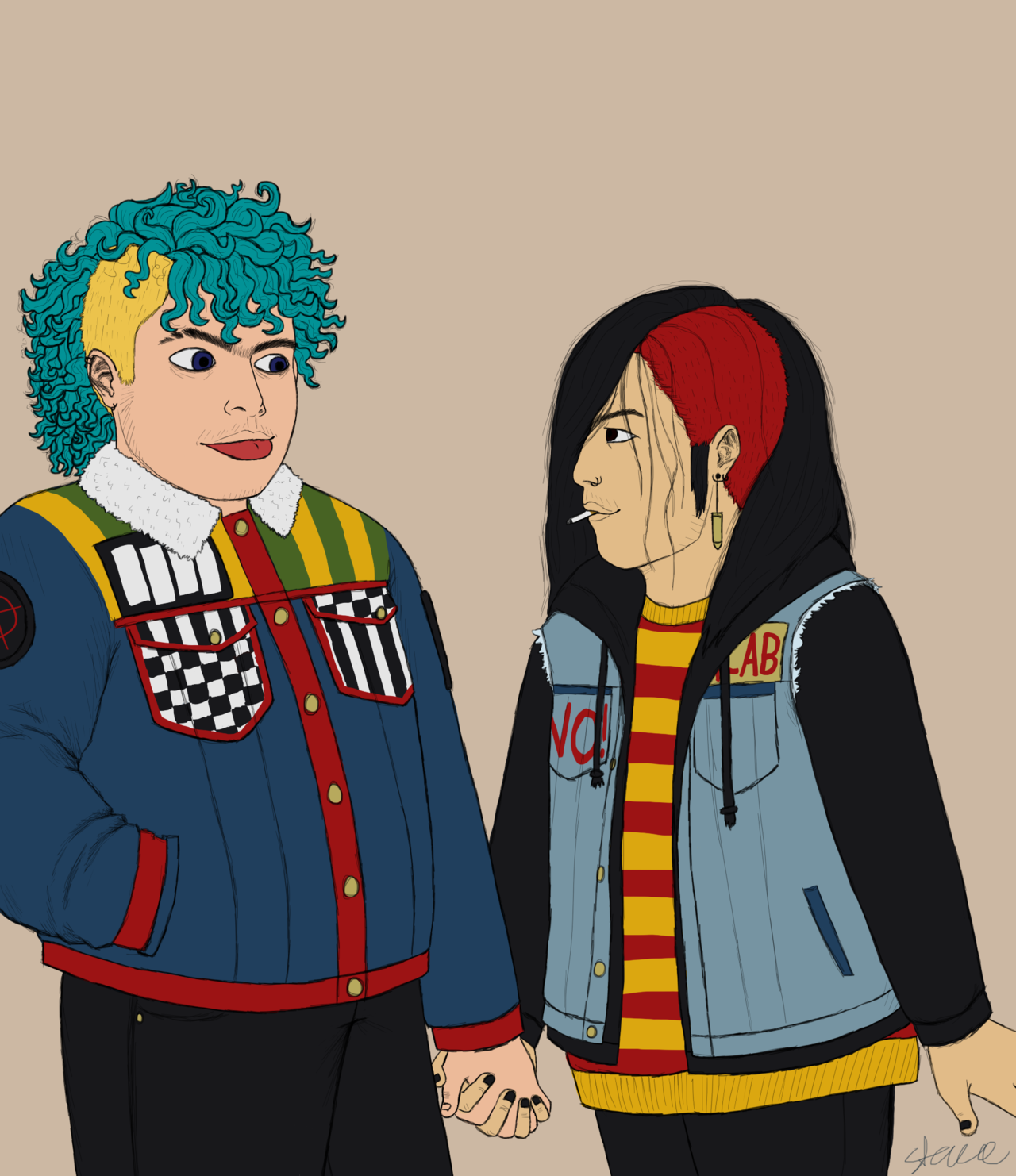 Another drawing of Babysister with Libra. I wanted to draw Babysister with her mohawk down and not straightened and I think I just continued drawing her that way. I can see here this is where I started drawing them with unibrows because I was growing mine out. Also! For both of them, I wanted part of their hair to be dyed and part of it not. I'm not so sure what my thought process was for that, but I guess I wanted viewers to realize that this is Babysister and Libra somehow. I gave Libra her one bullet earring again. I like that earring a lot. Also, Libra is smoking in this drawing. Don't smoke, kids. It'll kill you! 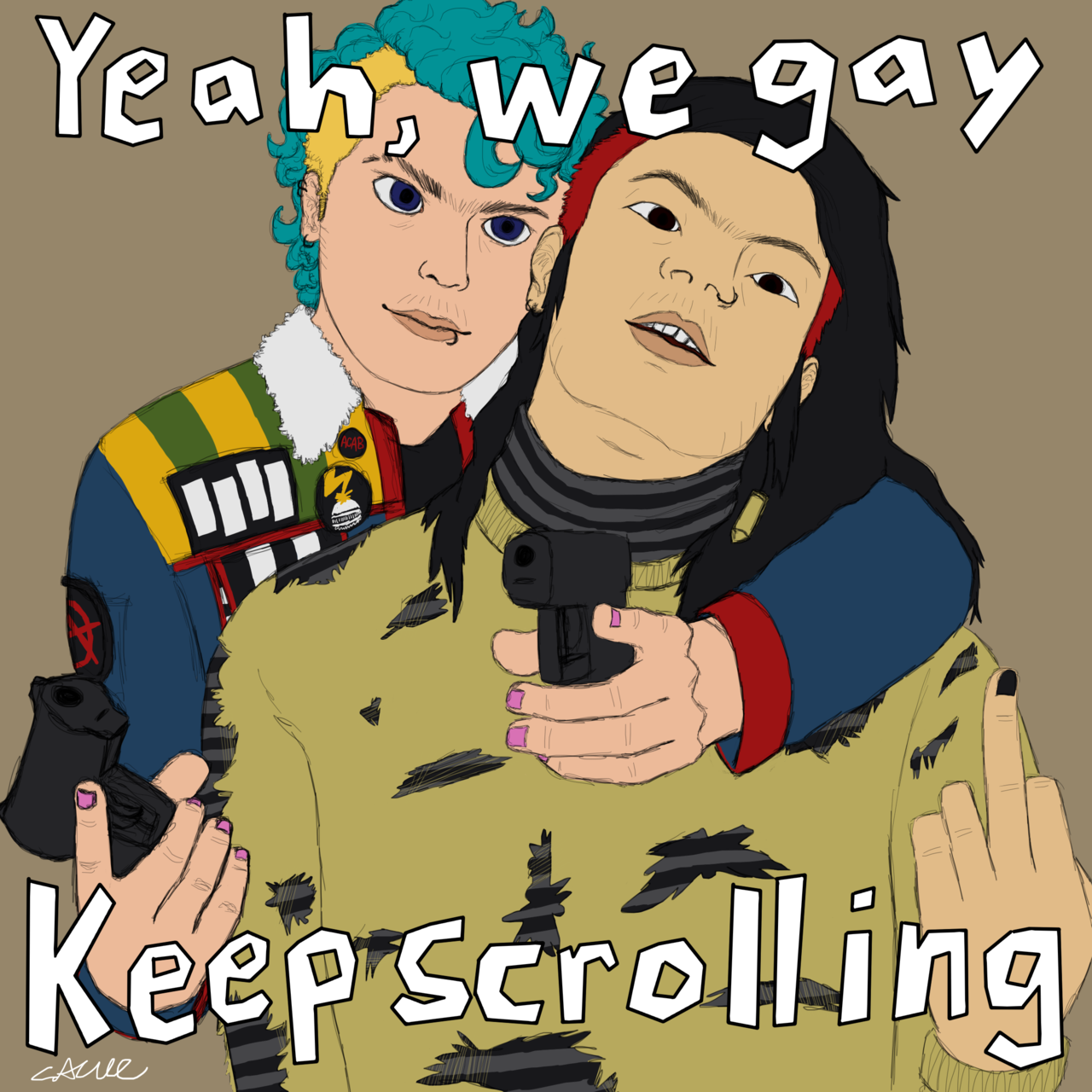 This is the only drawing that matters. Babysister would never use a gun, but it's an important part of the joke so I can't change it. I brought back Babysister's lip ring here. I must have been looking at the first drawing of punk them. I also brought back the jacket from the second drawing of punk them, but I added some more things to it because I thought it looked rather bare for a punk jacket. I also brought back Babysister's pink nails from the drawing before. I was going to give Libra some eye makeup, but it looked really weird at that angle. I am not very good at drawing makeup, but I don't think Libra would wear makeup that often anyways. More tears should have been added to Libra's shirt, I don't think it looks torn up enough! I think Babysister looks a lot like me in this drawing.

We're back to kid Babysister! Her pink guitar is brought back, but this time LIBRA is painted on it in white. Everyone must know how much Babysister loves her girlfriend Libra. That guitar looks really tiny. She has a similar outfit to the first punk drawing of her. Her jacket is the same and she's wearing the same shirt. Her pants are inspired by the pants I gave Libra in that punk drawing too. I made Babysister's hair longer and gave her cool sunglasses. I feel like if Babysister's hair was any longer than that I wouldn't like it as much. She would also probably freak out about how long it is and would impulsively cut it all off. 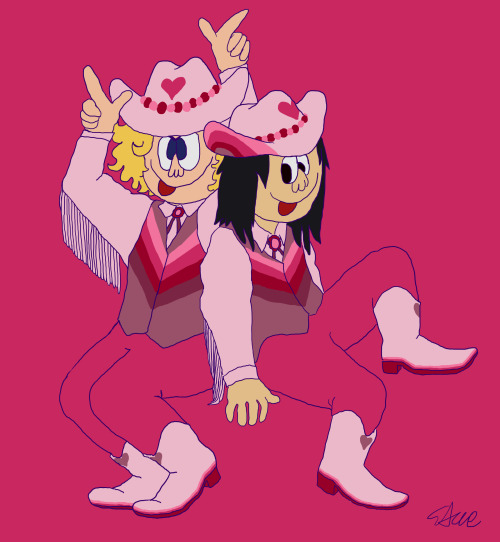 Kid Babysister and Libra are back! This was done for an outfit request. They're lesbian cowgirls now. I also posted this on Lesbian Day of Visibility! I think I added things to this outfit which weren't in the original outfit, I can not remember that well. I think they would wear matching outfits more often especially fun outfits. Libra would try to coordinate their outfits when they're older. She likes being the couple with matching outfits.