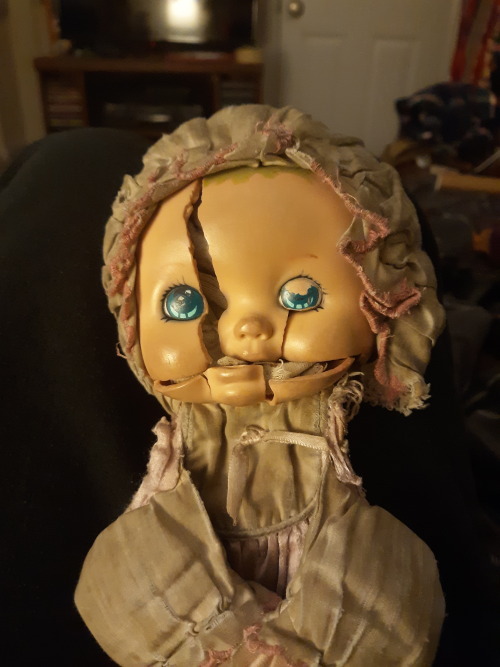 Baby is a Playskool My Very Soft Baby Doll. I am not so sure what year he is from since it seems that he was the baby for 1993, 1995, and 1998. I would assume he is from 1998 since that would be much closer to Babysister who is from 1999. Baby is the middle child! I have had him ever since I was born. The picture above was taken in 2019! I do not know how Baby broke his face or how he got holes in him. I do remember when he still had stuffing in his body, but there were large holes in his feet. I remember putting socks on him so his stuffing wouldn't fall out. I also remember when he had his squeaker, but it was broken. I kept it in his body and then moved it to his head and eventually I took it out altogether. He is quite an old baby!

Baby is a gay trans boy! He has a boyfriend named Jojo! Jojo is a clown. Baby likes clowns a lot. Baby uses he/him pronouns. Ever since I got Baby, many people have said that he's a girl because he wears pink, but that is not true!!! He is a boy. Some of the people who keep misgendering him I have told time and time again (probably ever since I could talk) that Baby is a boy. It's so annoying and it hurts Baby's feelings a lot.
Here are some facts about Baby. Baby loves to play with his siblings and his friends. It's probably what Baby does most. He has so many friends! He has a best friend named Euphoria who is a little brown bear. Baby is very scene! He does not listen to many scene bands, but he likes the scene aesthetic especially the lUlZ rAnDuM xD stuff. Baby is very loud. He talks constantly. Somethings that he repeatedly says are "I'm Baby!," "hewwosies!," "poopies!," and other stuff that are similar to that. Baby loves to eat a lot! He puts so many things into his mouth, he will eat anything. He's trying to stop biting himself and others. Baby likes to play the drums! Baby likes to slap things a lot so he prefers percussion instruments over others. They also make the loudest noises and Baby loves to be loud! Baby also loves to sing especially whenever we listen to The Aquabats! and when we watch Homestar Runner Puppet Jams. Baby also loves to draw. He is such a great artist. He likes to draw his favorite characters and he also likes to do self portraits. Here is a link to Baby's tumblr blog. Some of his art is posted there!

Here is a list of some bands that Baby really likes:

Here is a list of some movies that Baby really likes:

Here is a list of some tv shows that Baby really likes:

Now we have gone to the part where I talk about why I draw Baby the way that I do. I think most of it is quite obvious since Baby is already a human so it was easy to draw an older human version of him. His hair is green and straight because that is how it is painted on him. I always wondered why they decided to give this baby green hair since that is not a natural hair color, but whatever! I think it looks cool. Baby's eyes are the same color that they are painted on him. His left eye is lighter than his right eye because the paint on that eye is coming off and I thought it would be interesting to show that in my drawings of him in some way. Baby is actually blind in that eye. I kept Baby's skin color the same. There are scars on his face and those resemble the cracks that are on his face. I did not want to ignore those and had to put them in some way without it just being actual gore. Baby is the shortest out of the three of them. Whenever Baby is an adult, he would be around five feet tall. Baby is also left handed for a particular reason that is difficult to explain in text. It has to do with how his stuffing is placed in his left arm. I think that's all for Baby's design.

This is not the first drawing I have done of Baby, but it is the first drawing where Baby has his scars and Blanky is finally drawn how I want him to be drawn. I thought I had a few drawings before this one where Baby has his scars, but I guess I was wrong. It took me awhile to actually give him his one blind eye. This is the only drawing so far where he is not drawn in that cute cartoony styles like the ones below.

One of the many drawings of Baby that are in this piece. He's touching the knife that Babysister is showing him. This is just a normal drawing of him, nothing very special. He continues to have his short hair. I think Baby looks good in any hair length...maybe not a shaved head. 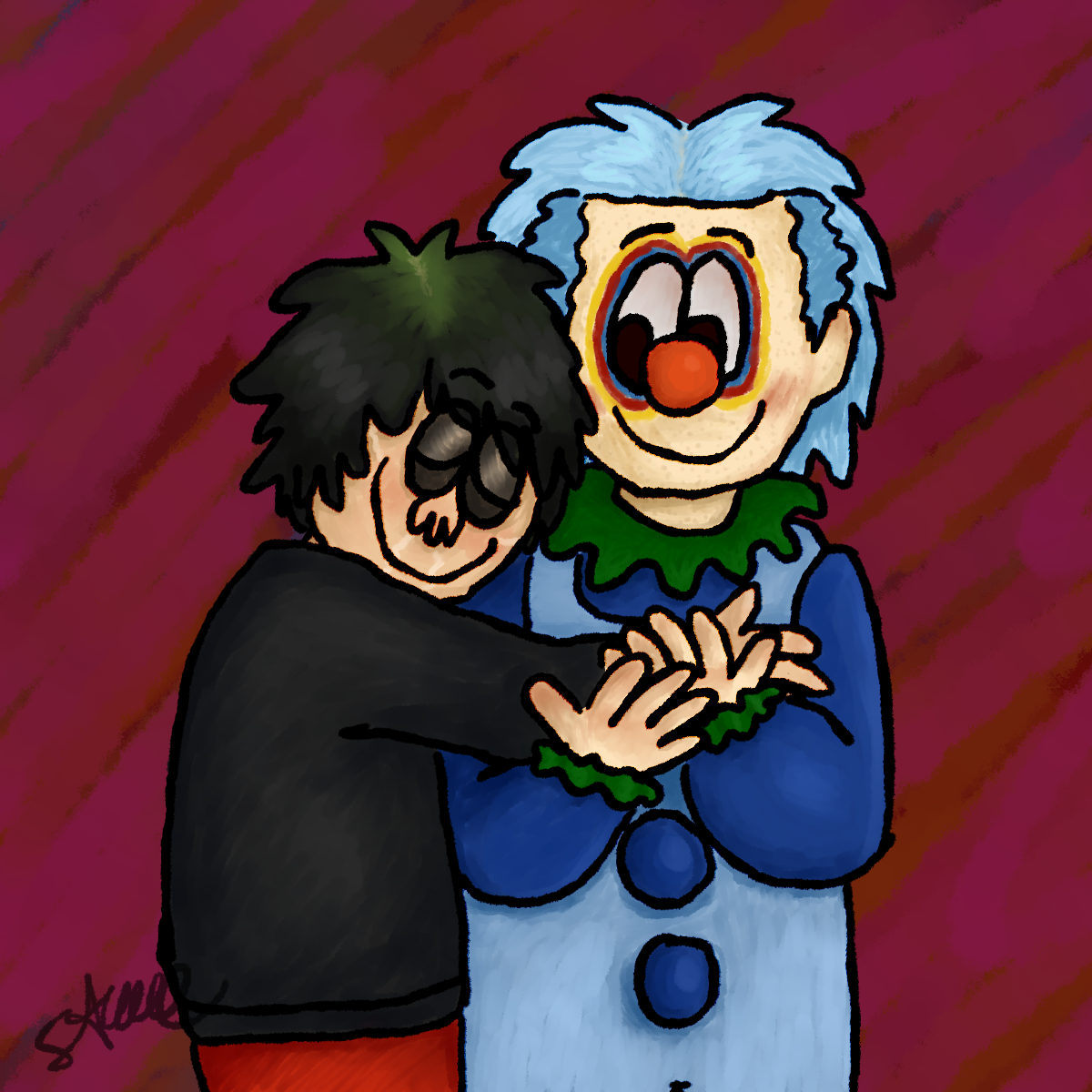 Baby with Jojo! Also, Baby is finally emo!!! This is the only time where his hair is dyed. I think this is the first time I drew Baby with long hair. I think he is trying to look like Gerard Way. I should draw more emo Baby. 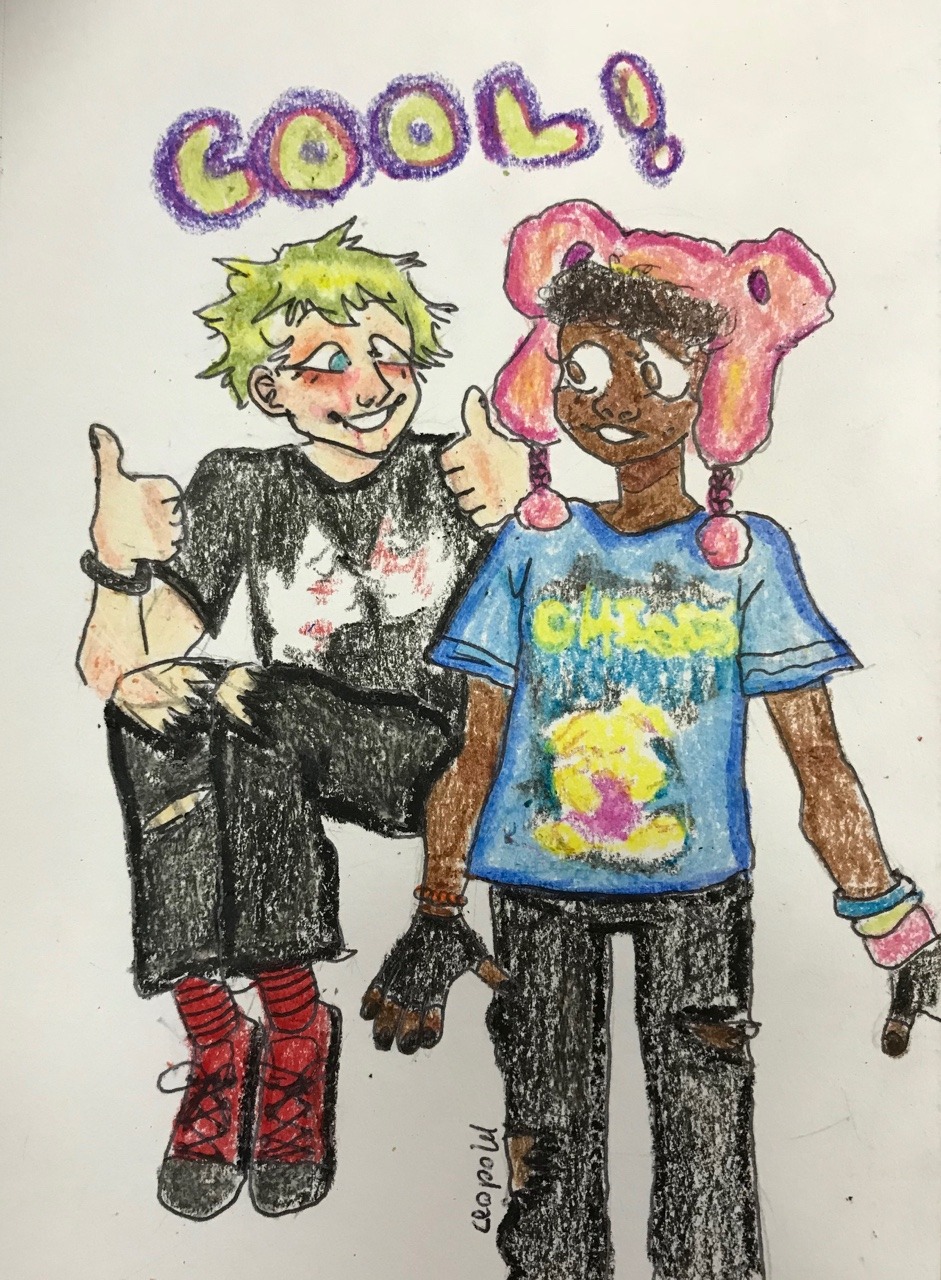 This was not drawn by me! This was drawn by my best friend Leopold. Please check out his tumblr art blog because his art is very good! This is a drawing of Baby with his best friend Euphoria. Baby has made Euphoria emo! I really like how Leopold draws Baby. He has a few other drawings of Baby with Euphoria if you're interested in seeing more of them. I should definitely draw these two together.

I do not think there are any drawings of Baby that I posted between this one and the one of him with Jojo. That sure is a long time without Baby. Baby got his long hair back, but it's just his natural color here. I really like Baby's outfit, I think it would make sense for Baby to wear colorful clothes that don't match although his outfit here looks pretty coordinated. This is also proof that Baby likes to play the drums or at least a large bass drum. That would most likely be his percussion instrument of choice. It is large and he can just bang on it as much as he wants. Yes, Baby is wearing a skirt. I know I said he is a boy, but my children do not care about stupid gender norms.