I started sewing some more. I'm doing this as practice and just to have fun because not everything I have to sew needs to be perfect. All I got so far are some dolls, but I'm sure I'll make more things in the future. I hope you like them. 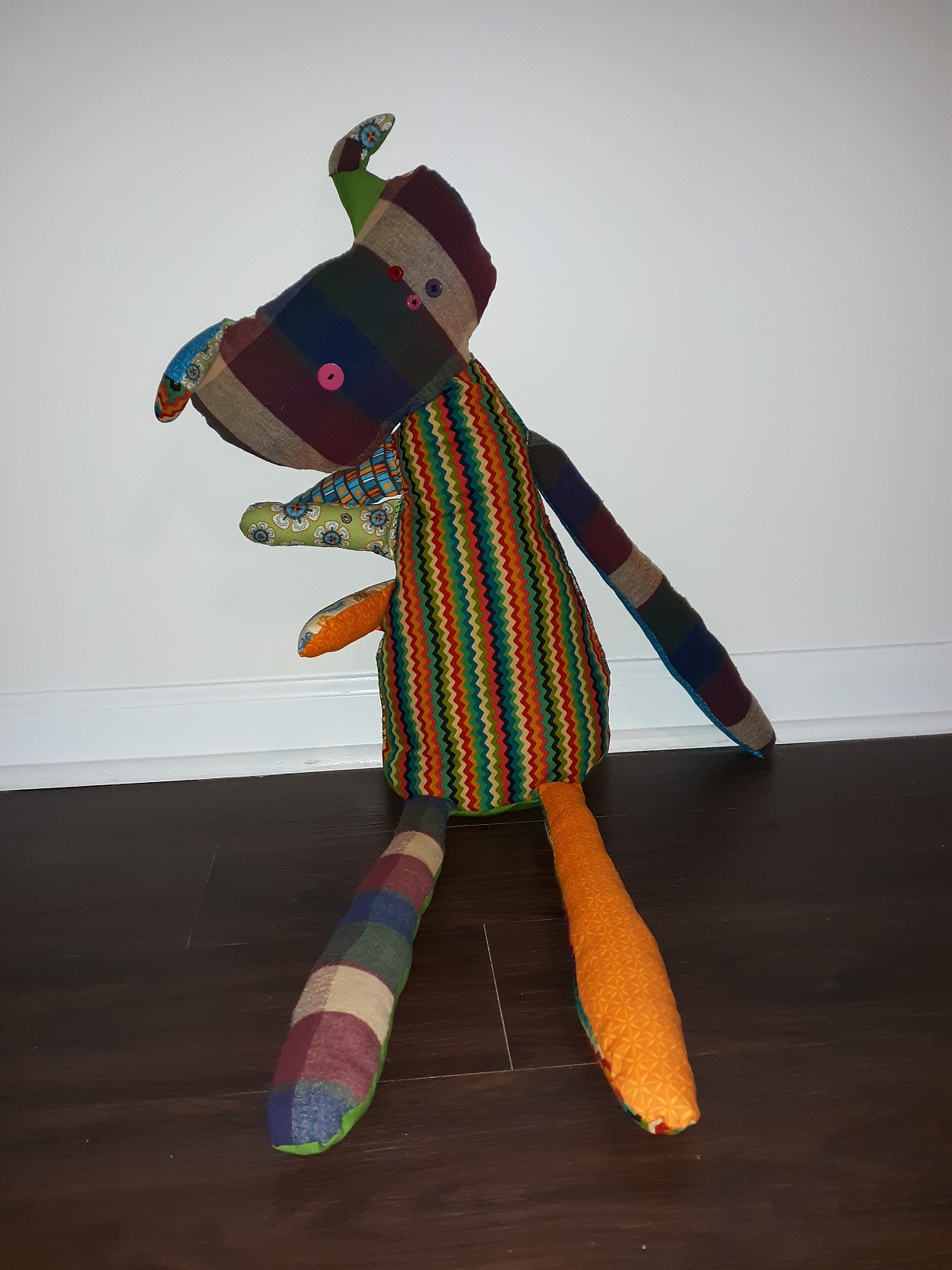 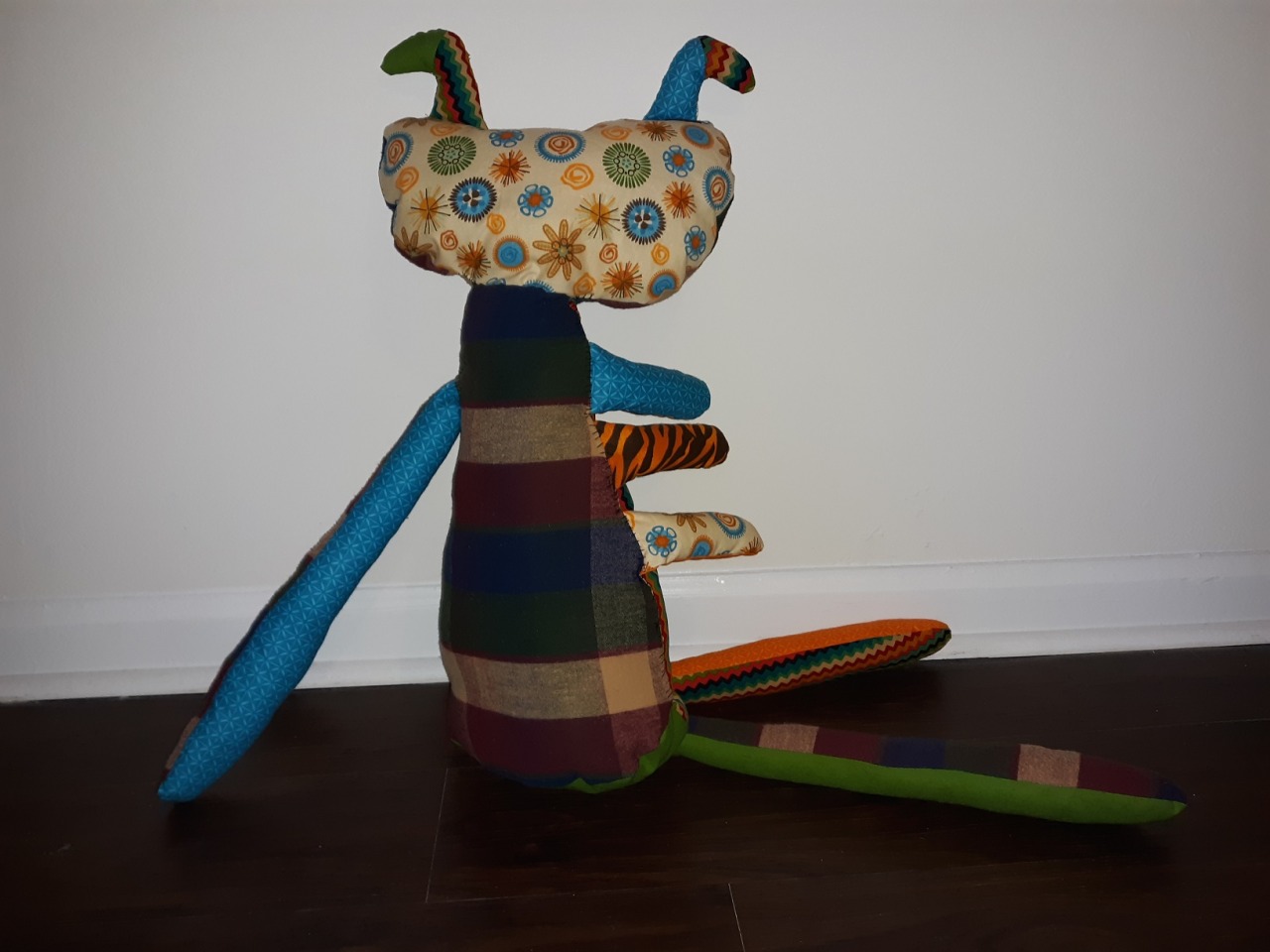 This is the first doll I've made. She's a bit taller than three feet. I only wanted to use fabrics I already owned and I wanted her to be some sort of a ragdoll with the mismatched patterns and fabrics. She took me two days to finish. I like her a lot. I think she's very pretty. I also have this box of buttons that I want to use for something so that's why her eyes are like that. I have decided to keep her since she is the very first doll that I've ever made. I keep calling her Too Tall Girl since she is quite a tall doll. I think she's the tallest doll that I own. 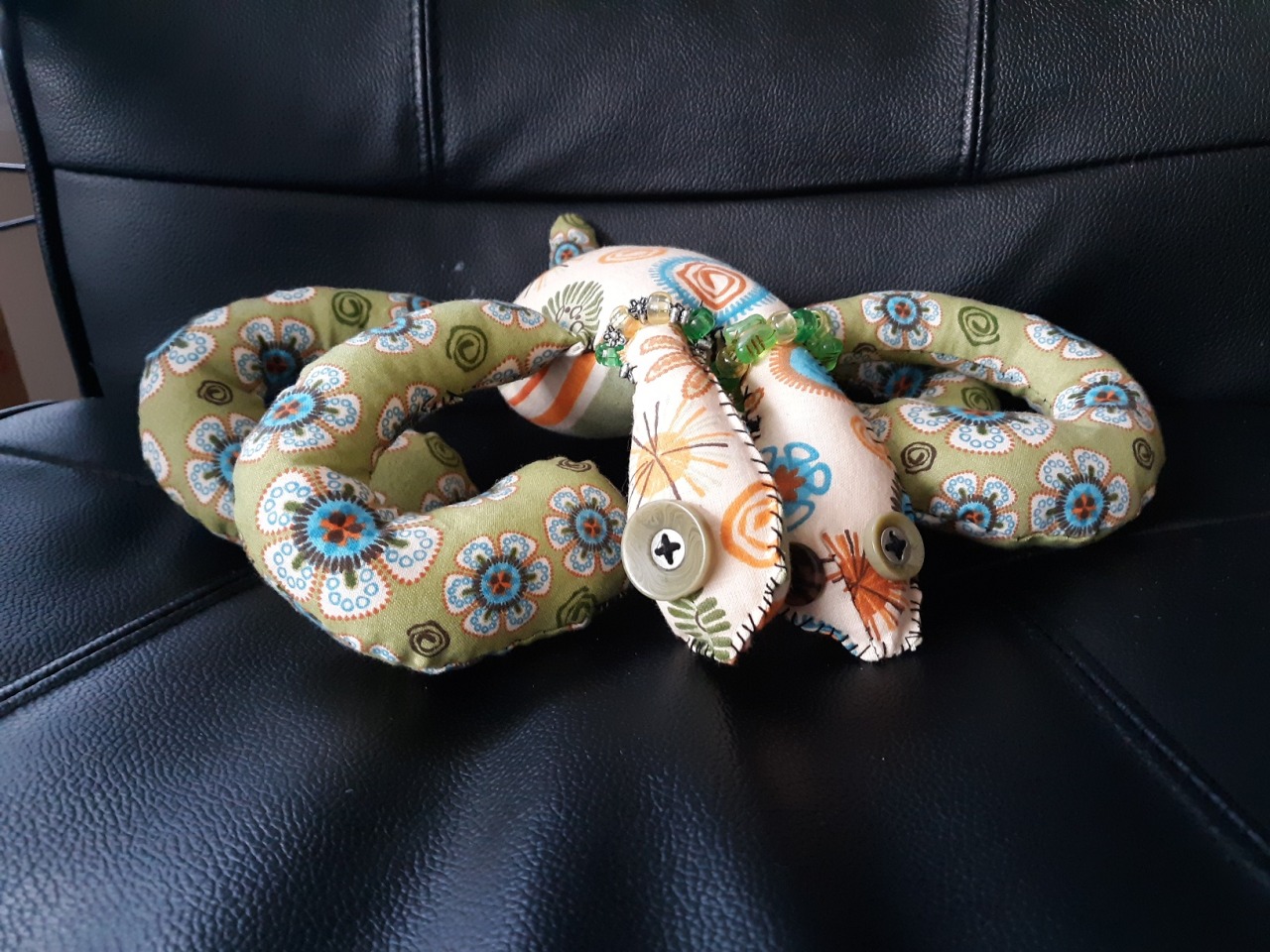 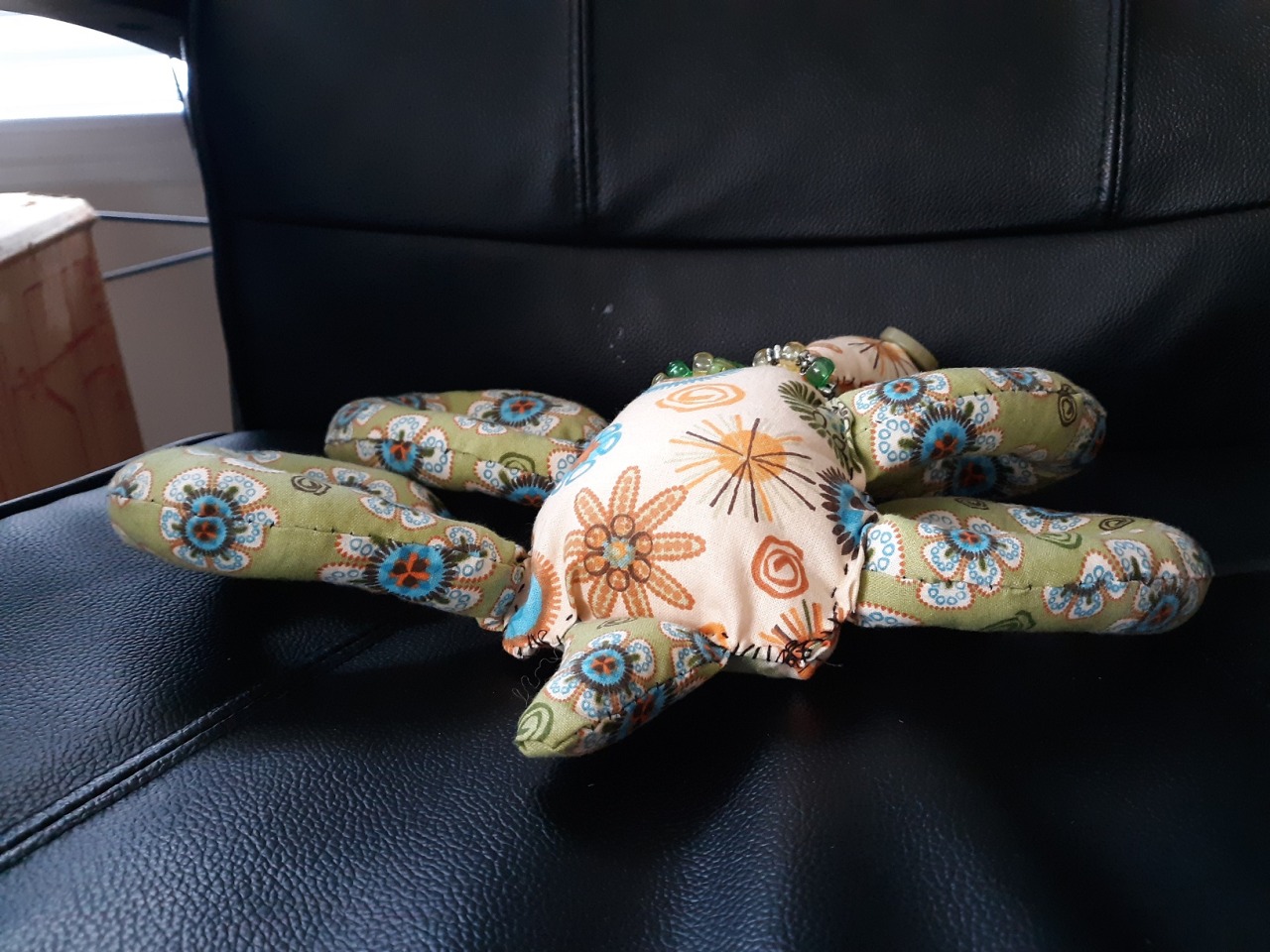 This is the second doll I've made. I made them right after the first one. I wanted them to be a lot smaller and I wanted to sew the whole thing by hand. I messed up a bit on this one, but it doesn't matter. I also gave the necks some nice necklaces. I wanted this doll to match more and be more consistent than the last one. This doll ended up with a friend of mine and he named the doll Ajay. He picked this doll because they look similar to a turtle and my friend really likes turtles. 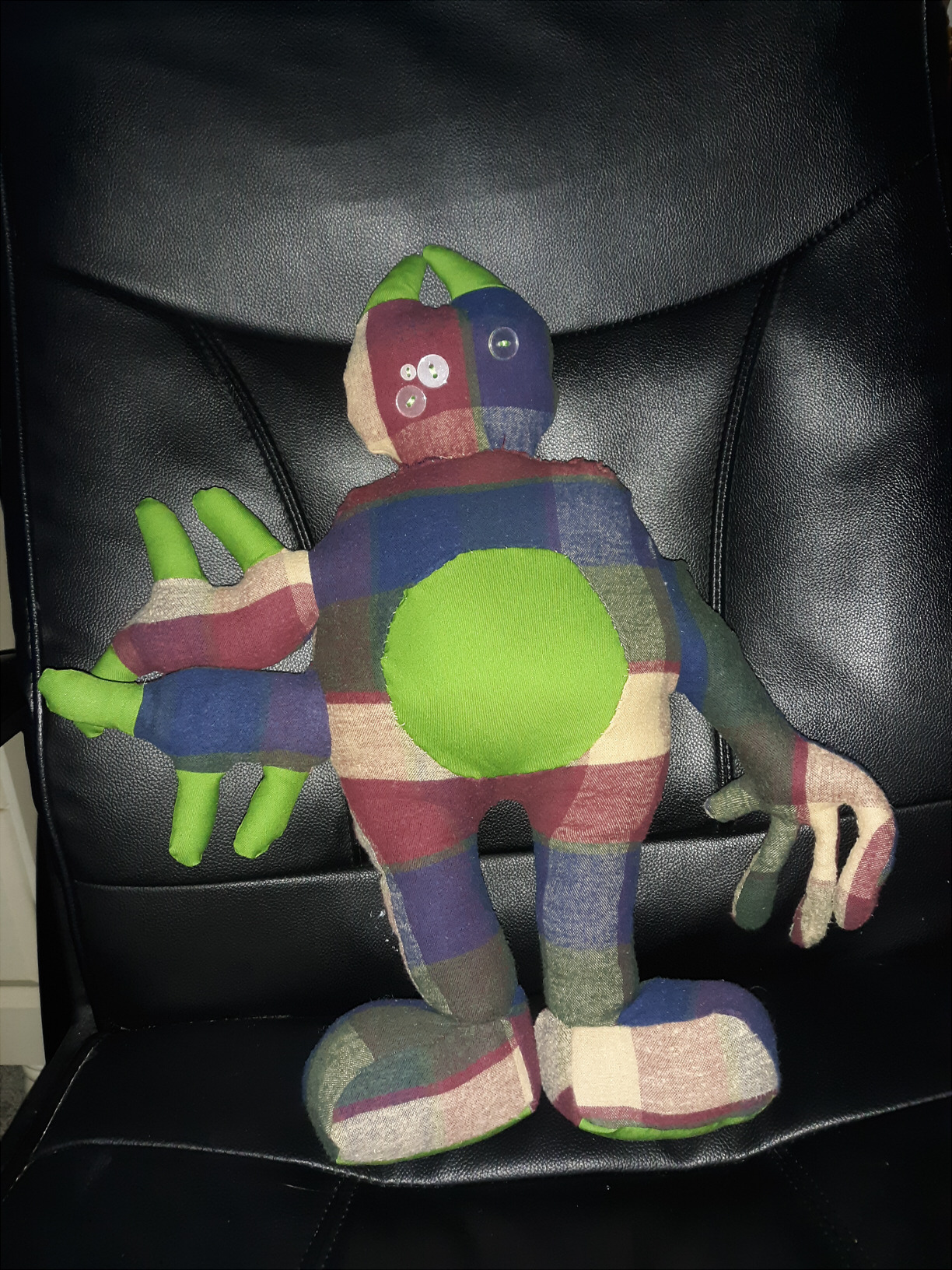 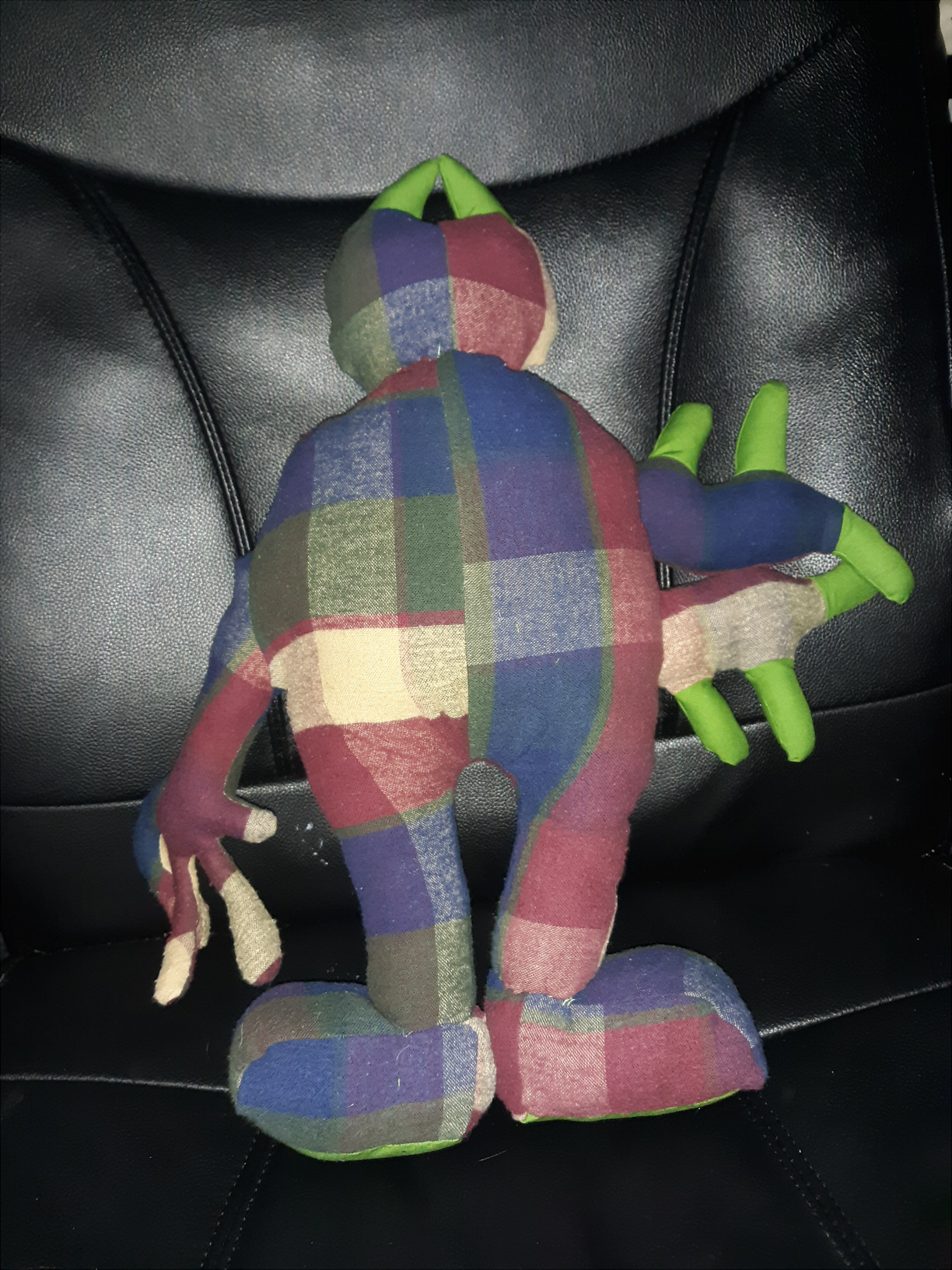 This is the third doll that I have made. I wanted this one to have a belly kinda like a bear. That part was difficult to do and I did it by hand, but I think I now understand how I would be able to do it with a machine. I also wanted the fingers on their left arm to be similar to how I draw fingers like shown in this one drawing. I also had some trouble attaching the feet to the legs, but I think I got it. I wanted to only use clear buttons for their eyes because I thought that would have looked cool. I have decided to keep this guy and I named him Ezra. 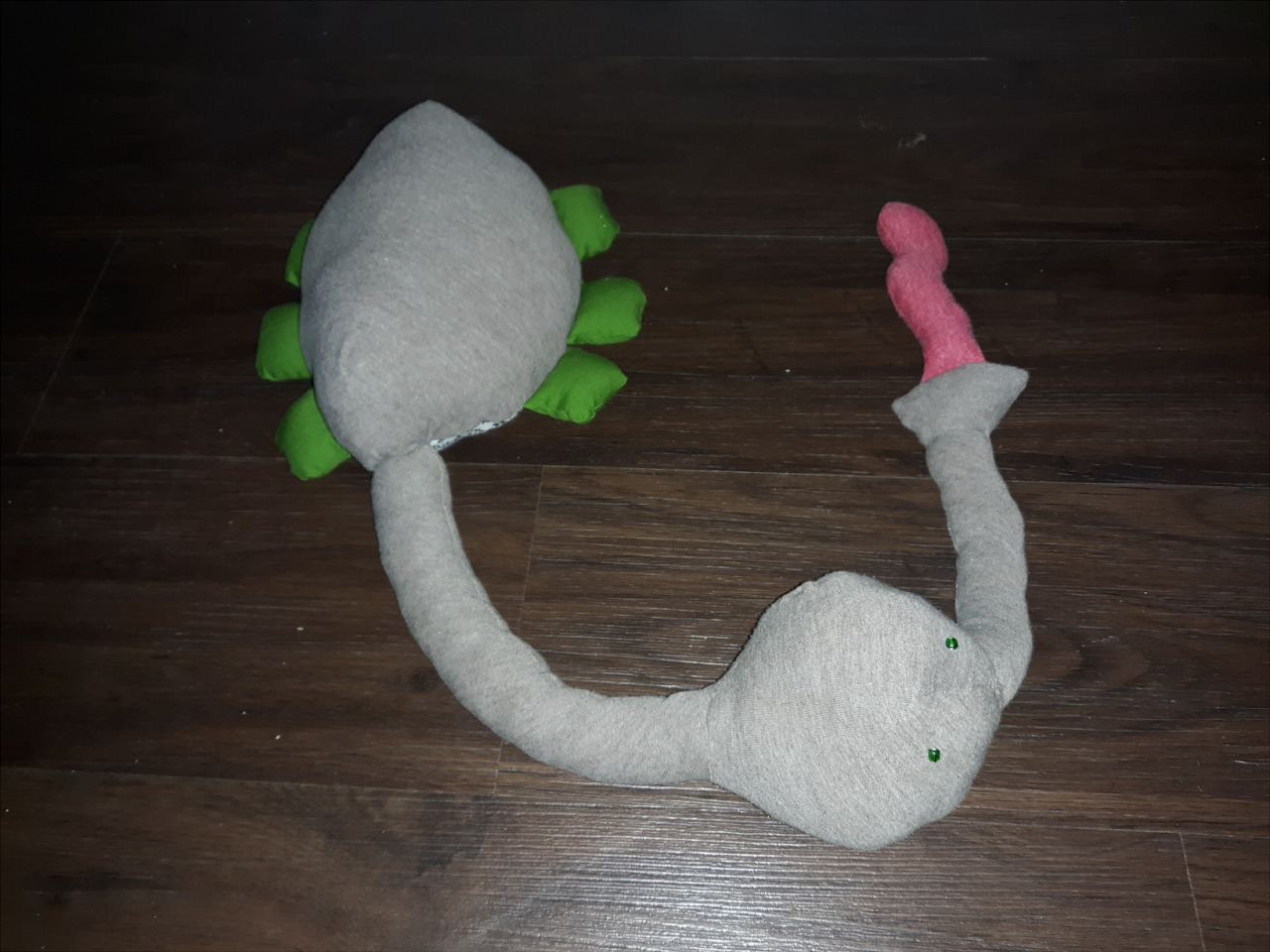 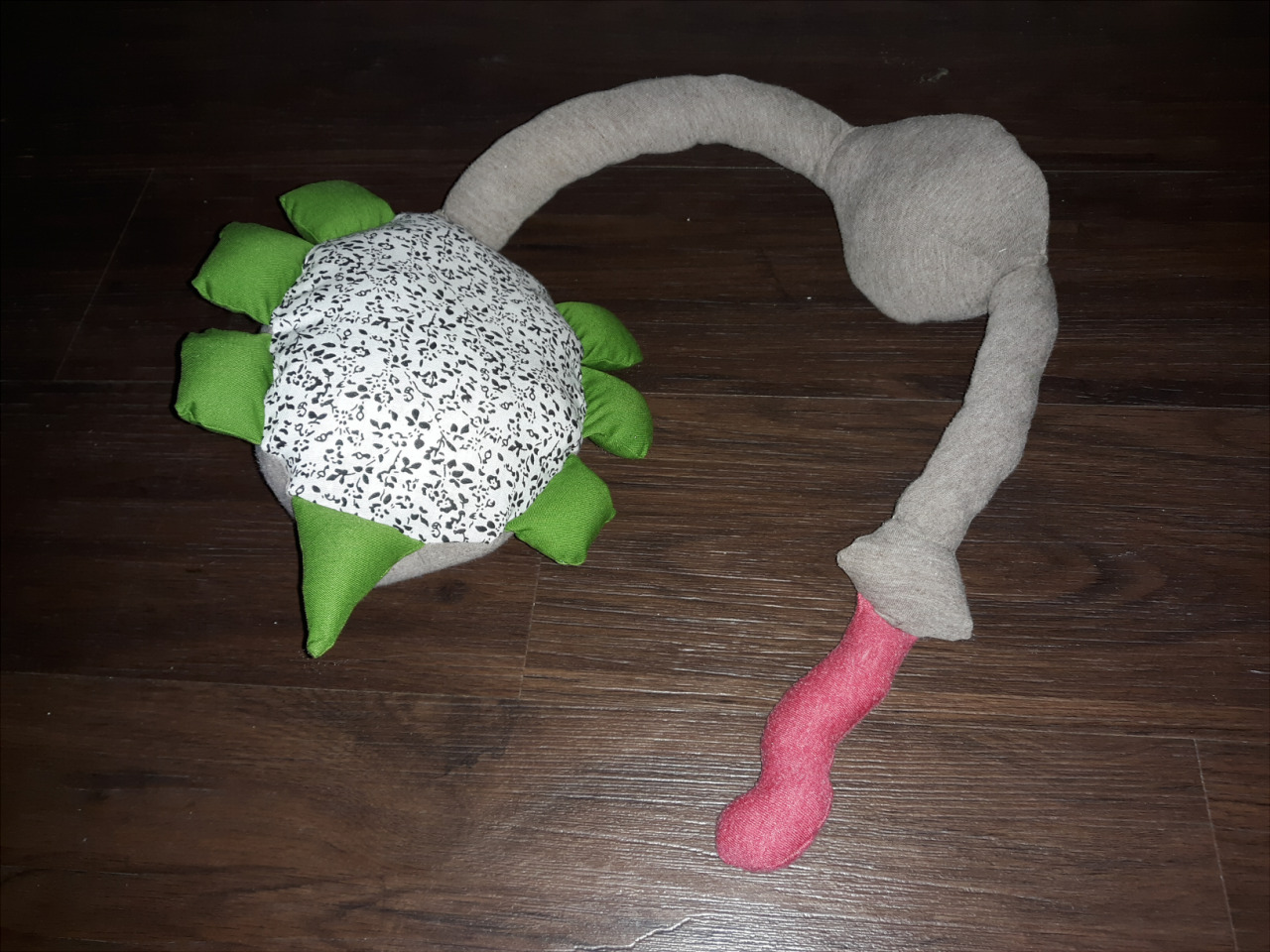 Here is the fourth doll that I have made. This one was difficult to make because the grey and red parts are made of polyester and that material is very hard to work with since it is very stretchy. Those parts are made of old shirts that my brother used to wear. I wanted to make a doll with a really long neck and have a long snout. The tongue didn't end up how I wanted it to be, but I think it looks fine. This time I used beads for their eyes instead of buttons. I have a bunch of these tiny beads that were in a friendship bracelet making kit and I never used them for the bracelets so now I'm using them for eyes. I also bought some new fabric and used it for underneath the body. This doll was claimed by a friend of mine and was named Kipper. 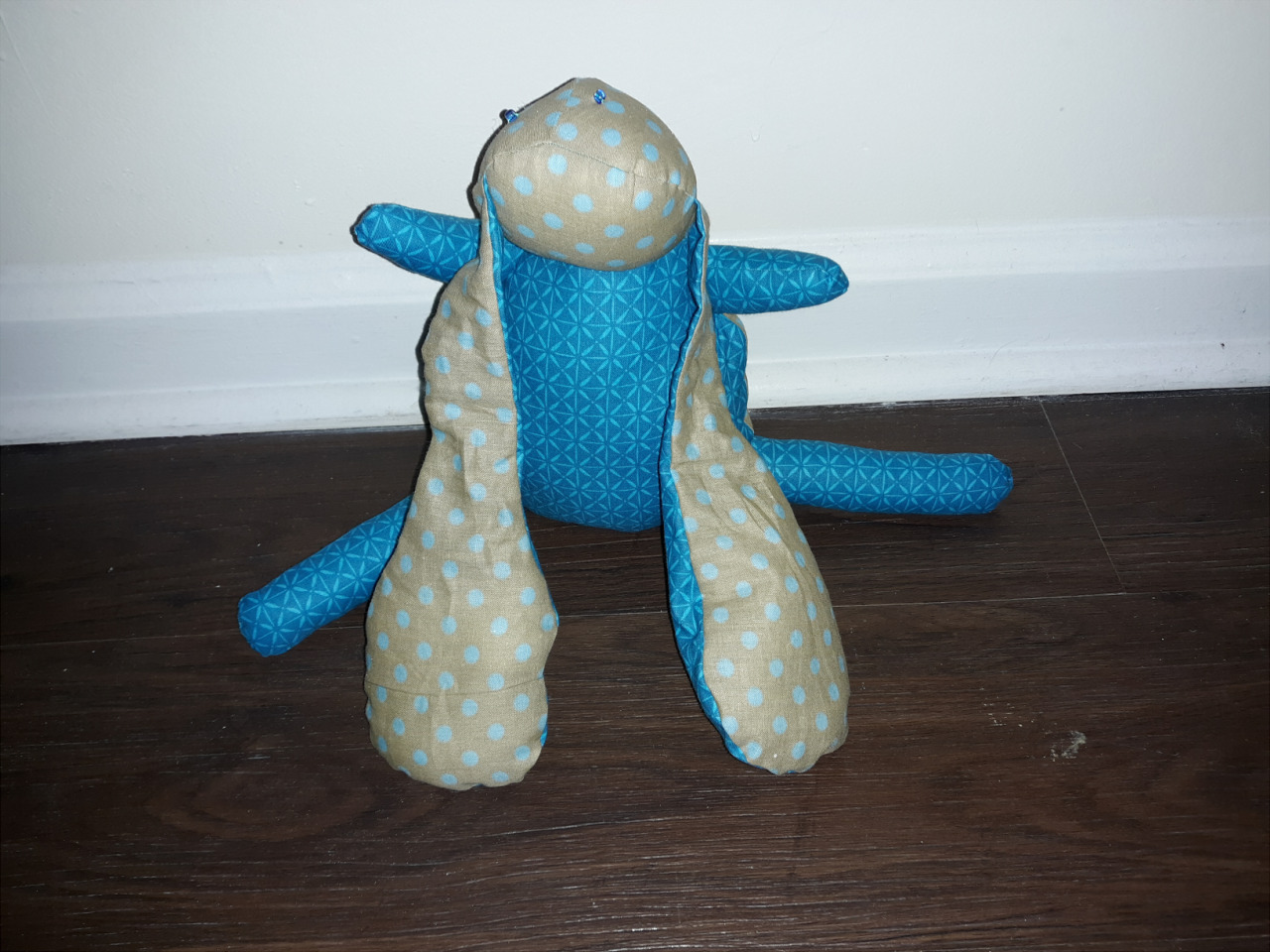 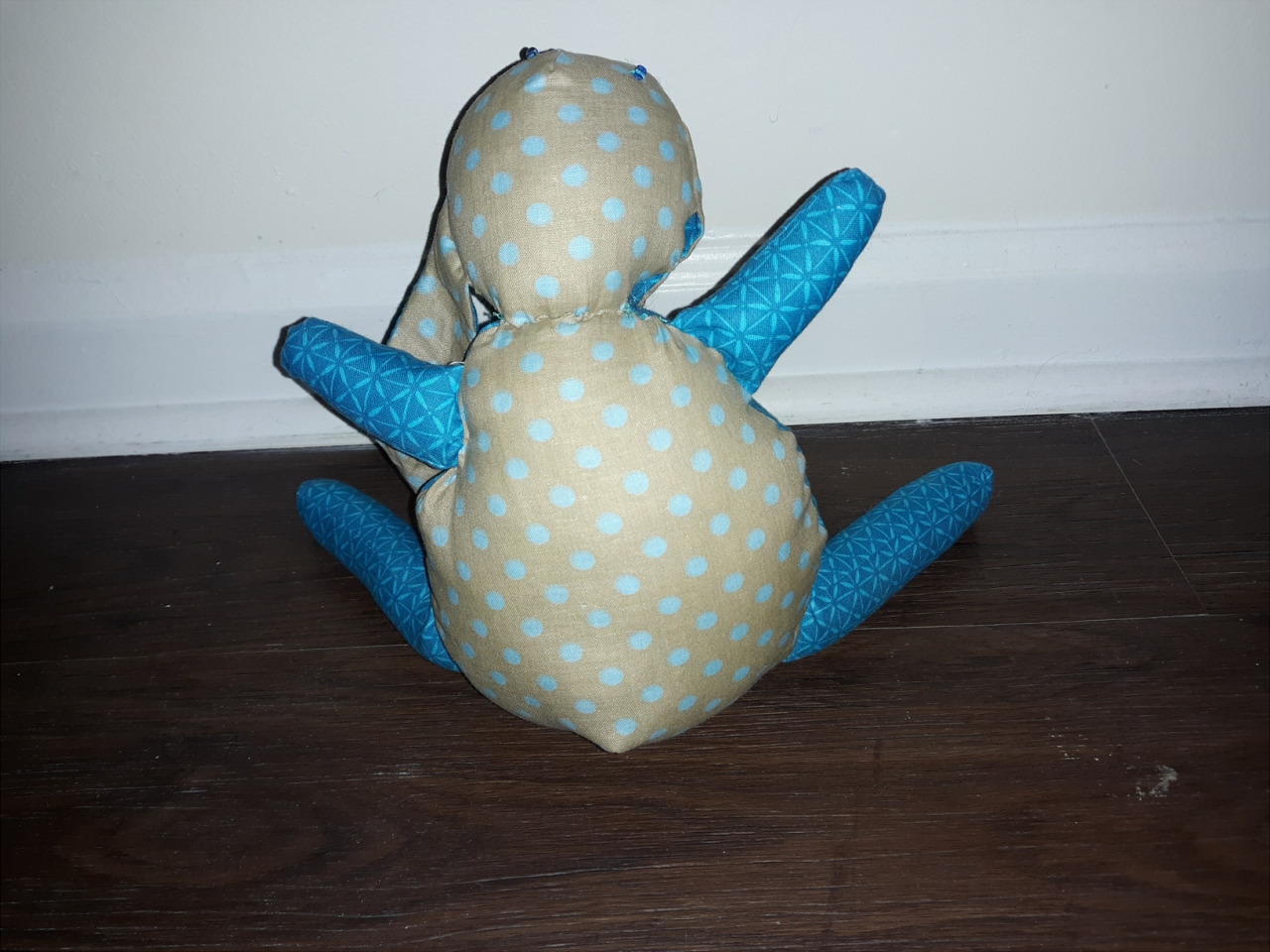 The fifth doll that I made right after the fourth doll. I surprisingly was able to finish this doll in one day. Most of the other dolls took about two days. I also bought new fabric for this one which was the dotted fabric. I'm not so sure why I bought this pattern since I don't like it so much, but I guess it can fit with some dolls. The main thing I wanted to create with this doll are floppy ears. I wanted the doll to have longer legs in the back so whenever they're on all fours their butt is up in the air, but that didn't work so well with this doll. I didn't plan it out so thoroughly. I didn't plan out any of these dolls that thoroughly. I really messed up on that left arm. It shouldn't be caving in like that, but not all of the arm got underneath the initial seam so I had to keep sewing over that one part until it was closed. Oh well! I used beads for eyes on this one, too. I think I'm going to use the beads only for much smaller dolls. This doll was claimed by a friend of mine and was named Ray. 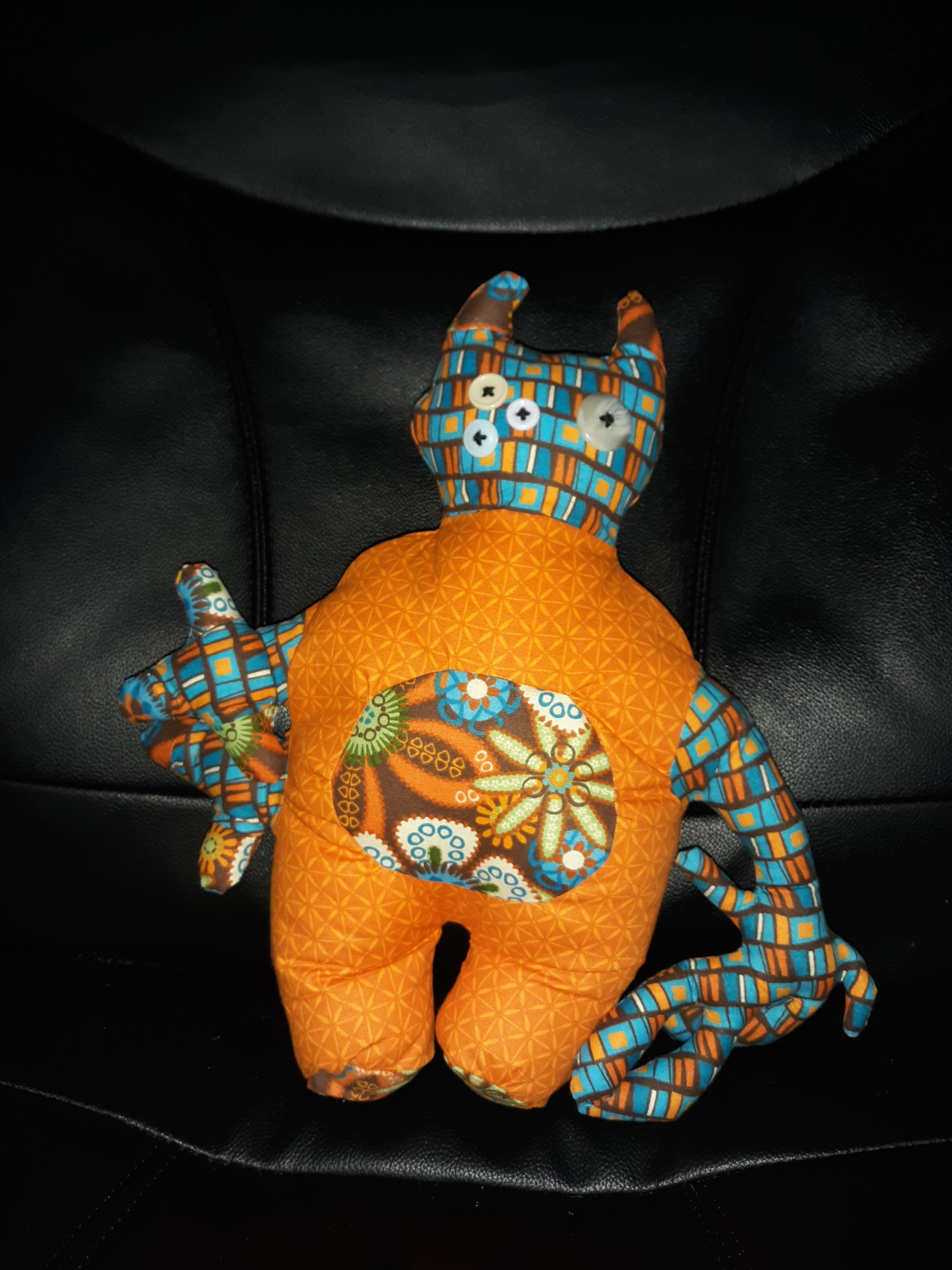 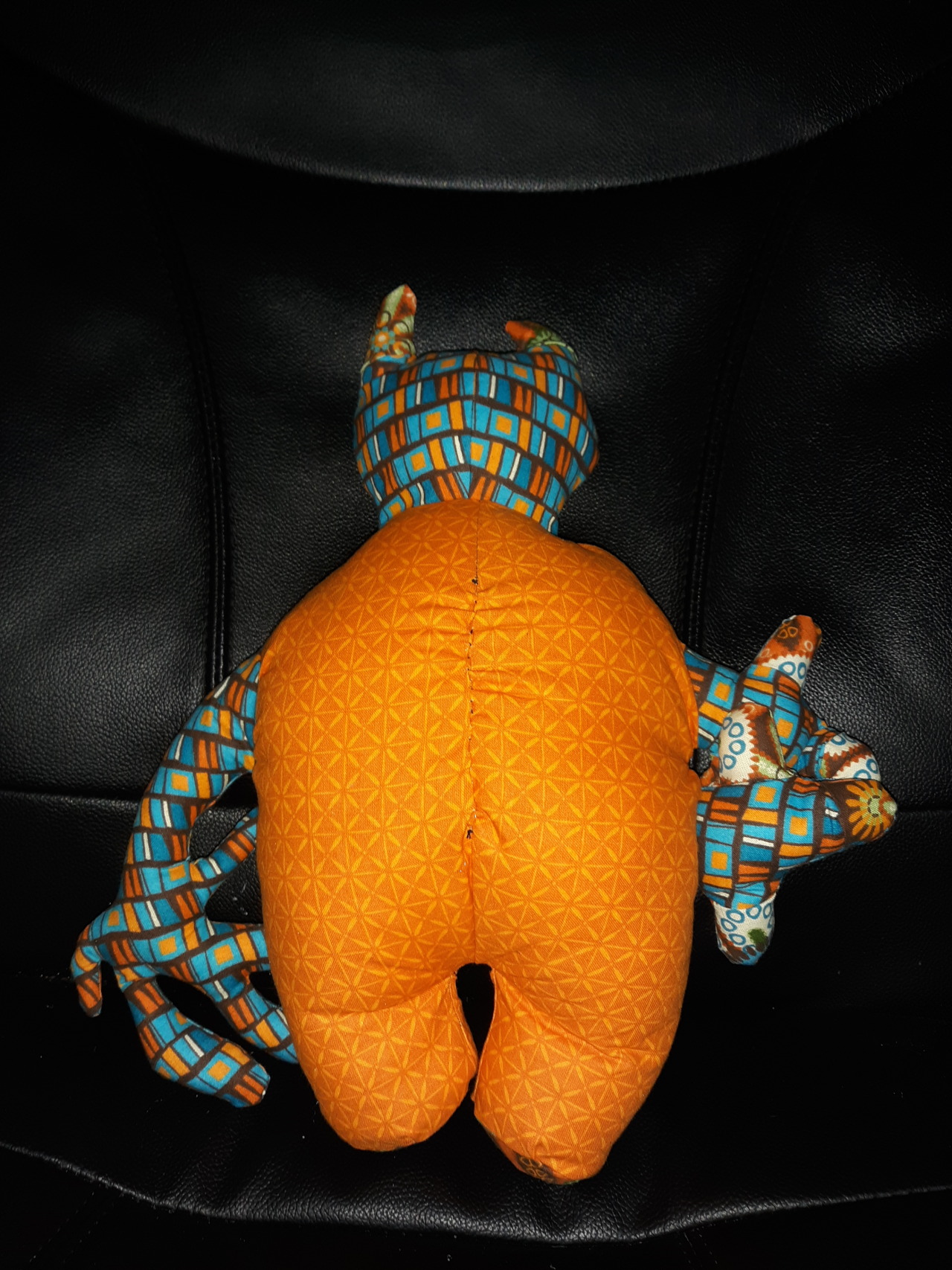 This is the eighth doll that I've made. I wanted to redo the design for the third doll that I made. The belly is so hard to do. I need to practice that more. I messed up on the positioning of the two arms on the left, but I didn't feel like removing all of the stitching so now they're overlapping each other. I wanted them to go out away from each other. Since this was another practice doll, I used more of these fabric samples that I've used before. This little guy has been named Dmitri. He is the little brother of Ezra. 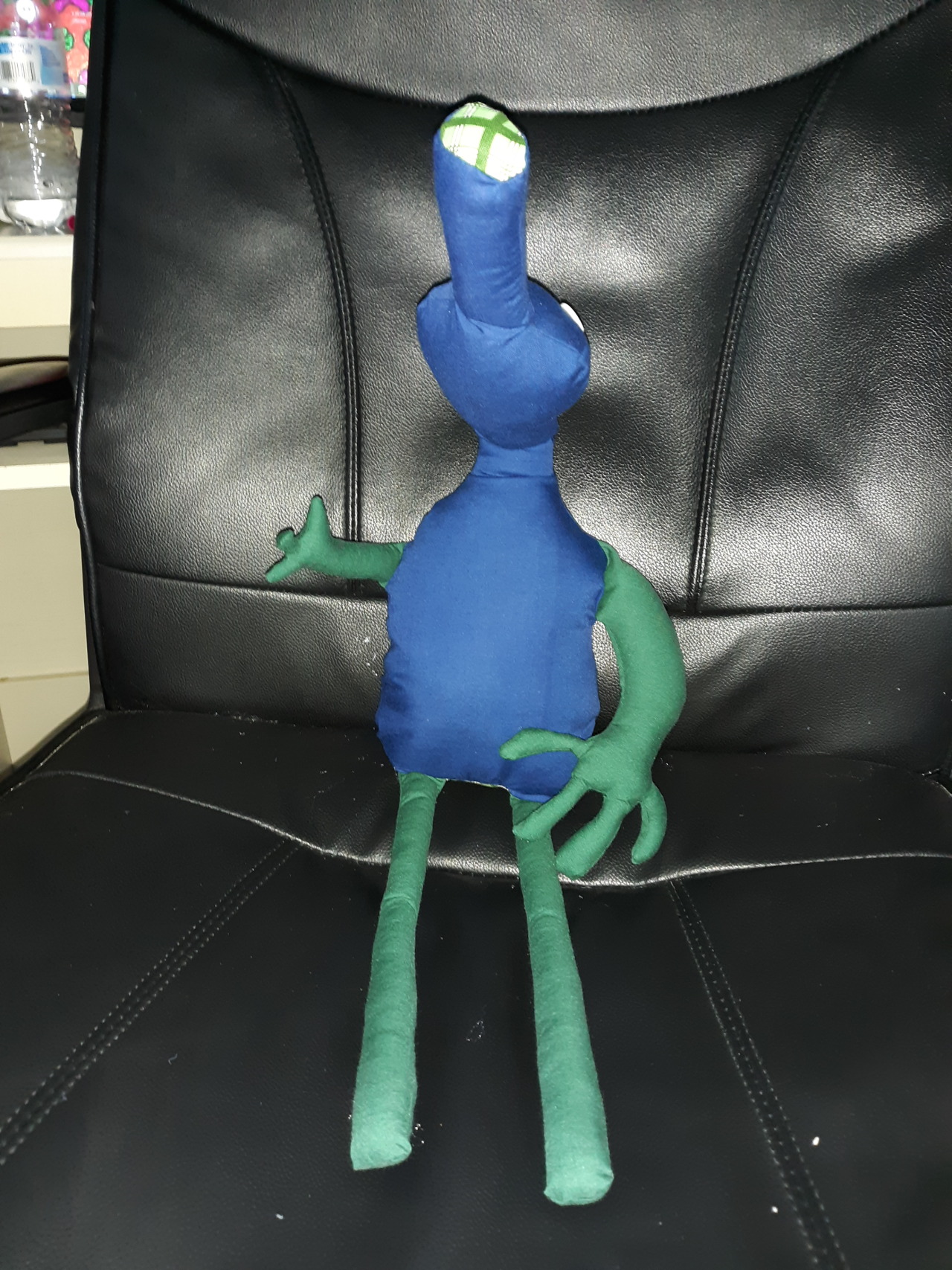 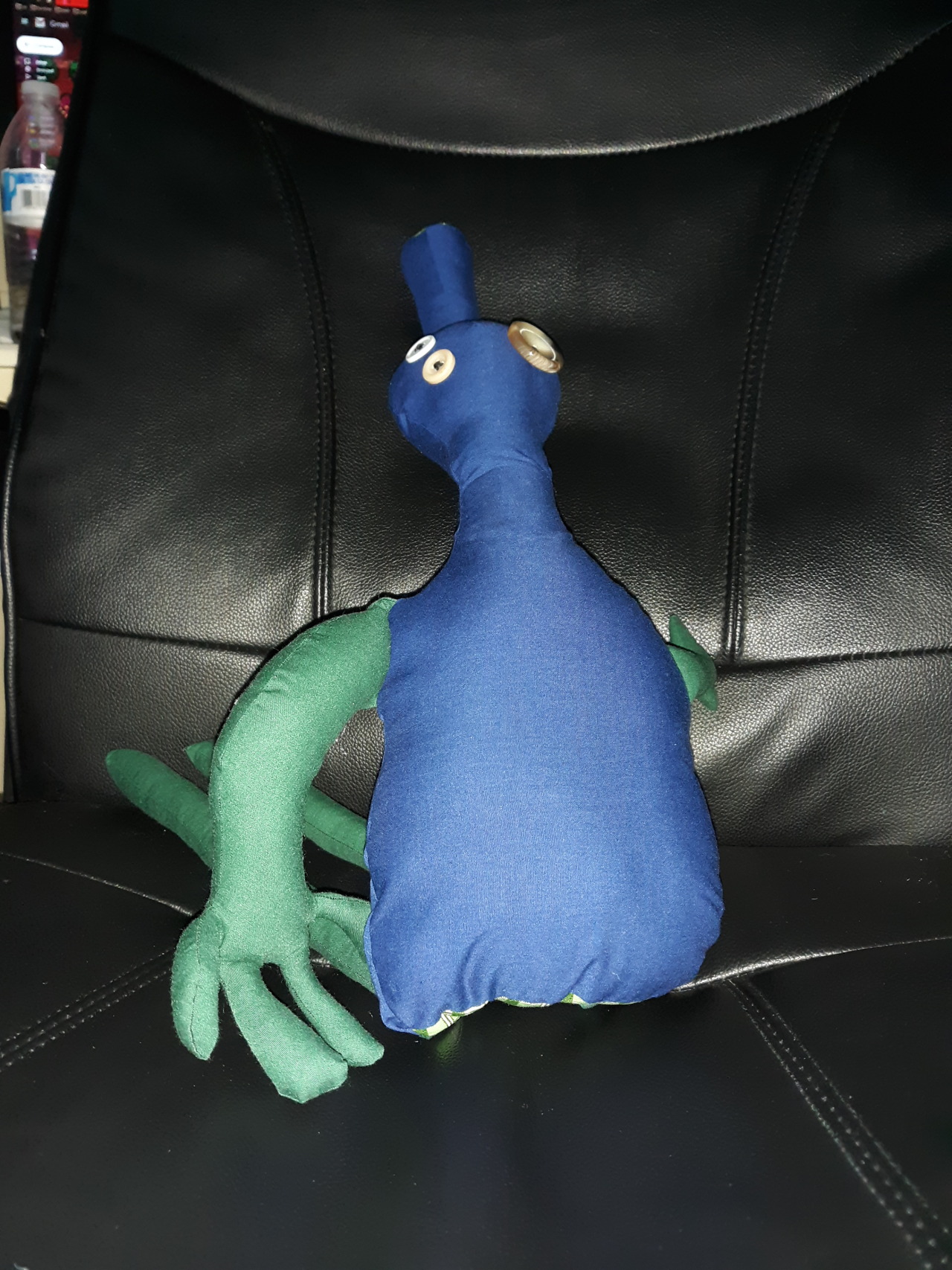 This is the ninth doll that I have made and my first commission!!! My mother showed her boyfriend the doll that I made before and he asked me if I could make one for him. He said I could do whatever I want, but the doll should be at least blue and green. I wanted to revisit that fourth doll that I made in a way. I didn't reuse the template from before, but I wanted to have another doll with a long snout. This doll was named Durante because of his huge snout (if you look up Jimmy Durante then you'll understand why he was named that). How come all of the smaller arms end up on the same side of the doll?